Hasan Sadikin General Hospital was established in 1923 under the name “Het Algemeene Bandoengsche Ziekenhuijs”. In 1927 its name was changed into “Het Gemeente Ziekenhuis Juliana”. During the Japanese occupation, it was used as a military hospital under the name of “Rigukun Byoin”. Since the Indonesian independence, it has been well know as “Ranca Bandak Hospital”

In 1954 it was appointed as the Technical Implementing Unit of Health Ministry, Republic of Indonesia responsible direclty to Director General of Medical Care. In 1956 it was designated as a general hospotal with 600 bed capacity. Since the esablished of medical Faculty of Padjajaran University in 1n 1957, it has been assigned as teaching hospital for the student of Medical Faculty.

In 1967 its name changed into dr. Hasan Sadikin General Hospital. The dospital was named after a doctor who passed away during his services term of the director of the hospital, namely dr. Hasan Sadikin.

From financial management point of view, the status of Hasan Sadikin General Hospital has been changed several times giving more flexibility and autonomy in managing hospital revenue and expenditure. Since january 2006, it has been designated as a hospital applying the Finance Management of Public Service Institution.

As a calss A and the biggest hospital in West Java (soon will be a National Hospital Refferal), Hasan Sadikin General Hospital has a funtion as a top referral hospital for tertiary health services in the province and national center of excellence in Nuclear Medicine, Presently, its hospital with 996 beds could provide a wide range of services comprising with 20 medical specialties and 125 sub specialities.

Your Health is Our Priority 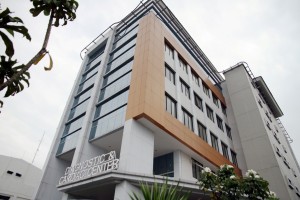